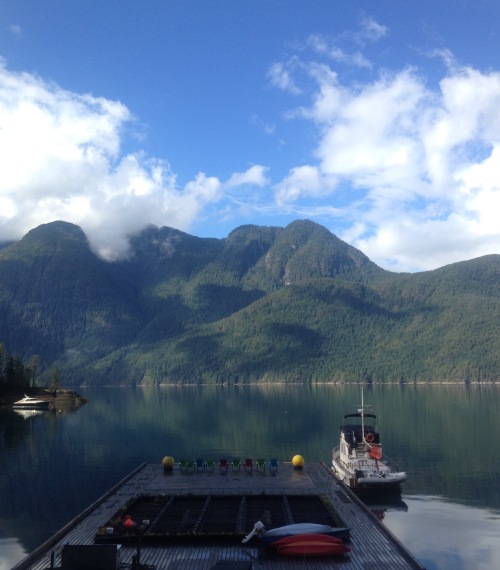 As I write, we have gone to sea. All our cares stay on land when we go. It works every time. The sea is its own reality. This summer has been characterized by inordinate heat, drought, and wildfires in the Pacific Northwest. Living on a boat surrounded by water has a calming effect.

We are retracing much of last year’s voyage to Desolation Sound with my sister and brother-in- law.

At 6am sharp, we shoved off from Roche Harbor, Washington. Cleared customs on South Pender Island, never knowing what fruit they are going to confiscate, this time it was eggs. Twenty eggs. We could stay and hard boil them and take them with us, but we wanted to make it in time for passing through Dodd Narrows during slack tide. No time to boil eggs.

In Nanaimo the first night, a busted water hose was discovered and repaired. But when we reached Lund, the last stop before Desolation Sound, something really went wrong. This has happened before on other extended boating trips, so we knew what it was: a migraine. I had O.D.’ed on light in BC Canada yet again.

It was a day I have nearly lost recollection of, but lying in the darkened bunk I had nothing but empathy for my father who at 92 has undergone more medical procedures than humanly possible. I felt inside his body. And the hauntingly beautiful sound of the bagpiper who plays an ode to every sunset at Lund, bringing the sun down with her pipes. That mournful sound became a part of me. But when I heard my brother-in-law’s voice on deck, outside my bunk–clearly it was another South African– “You’ve come,” I cried. “You found us!”

In my delirium I lost a whole day. And wound up that night in the ER for dehydration. Luckily we were near Powell River where there is a hospital, before we had slipped into Desolation Sound where there would be none.

That night, a young physician and nurse were on duty. Both were refugees from the exorbitant cost of living in Vancouver and had come to Powell River to live. Arriving just two months ago, the nurse has already purchased a home she adores, just steps from the beach, “a house for $250,000 that would have cost 4 million in Vancouever.” The physician, a waterfront lot upon which he will build. She’s got her kayak coming and is looking to add a small sailboat to her fleet, “just to explore around.” The physician loves to fish. They will do fine.

With each sweet drip of saline solution in my arm, I was coming alive and began recommending books to the nurse. Books with a sense of place to her new homeland: A Tale for the Time Being, by Ruth Ozeki and The Curve of Time, by Muriel Wylie Blanchet. She wrote them both down and promised to read them. And I promised to wear darker sunglasses. Stay under the Tilley’s hat my sister gave me, and not substitute it for a straw hat no matter how warm. Stay beneath the bimini on the boat, and drink water water water from dawn to dusk.

Canadians know this well, we move through people’s lives and can act pleasant and say thanks where thanks is due. It was the physician, the nurse and taxi cab driver that night for me. But when we can recommend books that we think will mean as much to them, we have really given them something. Reading by the fire in the darkness of her house in the woods at night, she will look up and thank me. I just know it. Readers are a tribe; we recognize each other.

The physician? Naw, he’s a fisherman 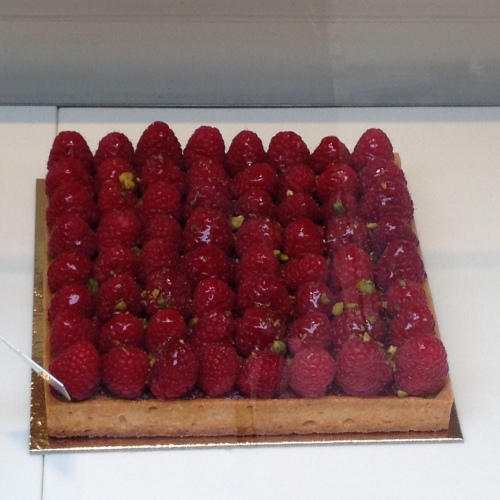 The French have a name for it, that is, for window shopping in pastry shops: Léche-vitrines, translation: “window licking.” Well, if I left my imprint on store front windows in Paris, they certainly made their imprint on me. For, ever since we returned home I have never stopped thinking about tarts.

We are boating now in British Columbia, heading out The Strait of Georgia toward Homfray Lodge in Desolation Sound. Before we left The San Juan Islands I ordered a tart pan from Williams Sonoma, and any day now our contractor will be receiving the package for me.

Sometimes we need to walk away and let go, particularly my husband who has been on the site of our remodel every day of the week, every week, since mid May. We’re in good hands here with him at the helm, and our brother-in-law, Tug Yourgrau, who has mastered navigation. The house is in capable hands with our contractor, and whatever gets accomplished will appear to me, when we get back, like magic.

I’ll be starting from scratch with my tarts. I saw them as paintings in Paris, and only knew how they tasted through others. But if baking is anything like other arts, it is probably hard to taste your own tarts anyway.

I intend to make tarts for breakfasts. Tarts for entertaining. Tarts for the neighbors who have put up with all the construction and allowed us use of their parking spaces for the many trucks involved. Tarts for any new friends I make on island. And if all goes well, a tart table at the weekly Farmers Market in Friday Harbor amongst other bakers, produce growers, purveyors of fresh pasta, lavender, sea salt, oysters, grass fed beef and lamb, as well as goat cheese makers.

I’m thinking that baking is for me because I’m a recipe follower. I never learned to cook at home. Growing up, I was the runner for whatever ingredients my mother was missing in whatever she was making. Seems I’d just hop off my Schwinn with one thing in the wicker basket, and she’d send me back to town for another.

Then when I went away to school, the feminist who ran the school assured us, “If you can read, you can cook.” So as the years went by, I bought a lot of cookbooks and made some beautiful meals by following recipes.

Somewhere along the line my husband took creative control of the kitchen, and I was almost back to the girl on the bicycle. I knew to stand out of the way. But if there’s one thing he doesn’t touch it’s the dessert.

So I am going to master tarts.

I’m thinking baking works with writing. One can’t wander far when it’s in the oven. And this is berry country. It all adds up.

Slip away for two weeks and what happens? My dear, dear, President Obama loses his mind and threatens air strikes over Syria.

We keep returning to Canadian waters in our boat. The goal this time was to go beyond The Puget Sound, through The Gulf Islands, up the Straight of Georgia, and into Desolation Sound. In speaking to my father, I called it our “destiny” when what I meant was destination. But I don’t know; maybe it is our destiny?

Located between mainland British Columbia and Vancouver Island, Salt Spring Island, in particular, has a distinctive history. In the mid 1800’s ex-slaves from Missouri who had made it to California came up from San Francisco at the invitation of Sir James Douglas, the first provincial governor of British Columbia. Here the British granted all the rights denied them by the United States: the right to vote, to become part of the local militia, to homestead and own property. Some of their descendants are established there today.

Then in the 1960’s and 70’s, American draft dodgers began arriving on Salt Spring and once again the island opened its arms. Again, many stayed and are among the artists, musicians, farmers, and small business owners contributing to the quality of life there today.

Are they ready for another wave of American ex-pats?

I don’t want to come home if we have to go to war. With all the work there is to do, we have to protest this now too?

“…. And as a nap slowly steals her away, she feels herself engulfed in a wave of absolute calm. She shuts her eyes. Drifts off, untroubled, everything clear, and radiant, and all at once.” Khaled Hoseini, And the Mountains Echoed

I am on my back on the deck and my eyes are closed. The boat is Desolation Sound bound, inching through the Puget Sound, Gulf Islands, and up the Straight of Georgia. I feel like I’m living in an Annie Dillard novel, illustrated every few miles on shore by Edward Hopper lighthouses, the only structures around. My husband tells me dolphin are leaping in our wake when I nap. That, he thinks, will keep me from sleeping. What he doesn’t know is I may be dreaming of whales.

As we make our way a sailboat motors by named “Breeze.” Moon jellyfish are pulsing beneath us, mountain peaks rise rounded, pointed, and tilting like witches’ hats, and Crayola white clouds as drawn by children. Otherwise it’s trees, trees, trees forevermore—a landscape that’s all-preserved, all-good, except when you think about bears. Whenever I step ashore, I think about bears a lot.

When I was young and growing up Catholic, I thought the ideal way to die would be in my sleep, in church. This required some practice in falling asleep during sermons. Remember when nearly every elderly person used to “pass away,” as they said, “in their sleep”? Lately everyone seems to die of specific causes, and so I was almost pleased to hear of someone dying in her sleep. Since that strikes me as a simple, peaceful and painless way to go, it’s good to know it can still happen.

I don’t need the church now, but I do need my sleep, day and night, more than ever. I am a napper. There, I’ve admitted it.

I had to help persuade my dad at eighty-something, still steeped in Protestant Work Ethic, into napping. “It’s alright, dad. Think of naps as prayers.” Does he know what a running start I had on him?

Napping and life go hand in hand for me. Just as in boating when we shove away from the shore–and leave it all behind, I love flying above the cloud cover, when it’s hard to imagine a country down there with all it’s configurations of land and water, all its human strives and heartbreaks. Away, away–apparently I am drawn to that.

Stretched out on my back on the deck, I could be anyone, anywhere, any age.