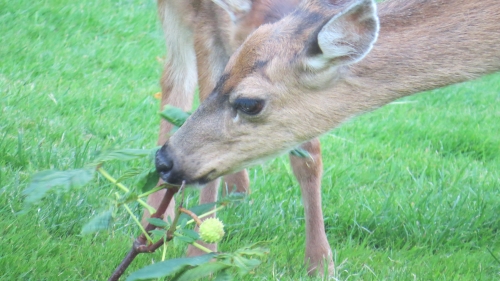 Summer came and our attention moved from inside to out. That, and when a house is on the water, everything gets turned around and the waterside becomes the front. So we are focused on the water now and we’re off in kayaks and guests of ours are coming by in boat. We are digging for clams, growing oysters in the water, and all our salad greens in planters on a sunny deck.

Let’s just say that summertime in the Pacific Northwest is so nice, everyone would live here if it were like this year round. So we’re glad it isn’t.

Similarly I am grateful for all that the deer don’t eat. It seems to me in gardening, with all the choices available, we need some restrictions. We need to plant native, preferably, drought-tolerant, and living on island, deer-resistant. Our smart nursery at Browne’s on San Juan Island has a few long tables that fulfill these requirements. Put in the right plants, and no need to see deer as menace.

While palates can differ among deer, I think it is safe to say they dislike strong-tasting plants such as herbs. Likewise they will leave euphorbia and poppies alone (milk sap), they avoid foxglove and daffodil (poisonous), lupine, Jerusalem Sage, Meadow Rue, Bigroot Geranium, lamb’s ear, salvia, foxglove, Shasta daisy and Iris. (Cosmos were on this list in my first draft, but they were chomped in the night so now they’re not).

Who can’t paint a picture with all that?

I’m planting Shasta daisy along the 134’ fence that lines the edge of the property from the steep grade bank to the beach. Our bonfire pit encircled with Adirondack chairs is before this fence, soon to be joined with the picnic table Bill Maas is constructing for us at Egg Lake Sawmill & Shake. Plus a Bocce Ball court we’re going to build on soil because our daughter gave us a handsome set for Christmas. The Shasta daisy lined fence will be background for all this activity, attracting butterfly by day and illuminating the night. And the deer have given us this.

This house had been standing empty for a couple of years before we purchased it, thus the deer made the property part of their park. It is their land and I am not about to fence them out. Surrounded by forests and farmland, pastures, lagoons, quarries and marshes, miles of trails and a winding country road, all this natural beauty—the deer are a part of it.

Native to the San Juan Islands, the Columbia black-tail deer graze about, their big black eyes following us. Where we live never a shot is heard, so this trust has been built up for some time. I just walked into it. Yet I now consider myself a deer whisperer. Talking softly and moving slowly, I assure them they are safe and that I love them. Attentive ears, they listen to me. Then go back about their grazing, grooming the woods, and munching all the pesky dandelions.

Filed under gardening with deer

A Work in Progress 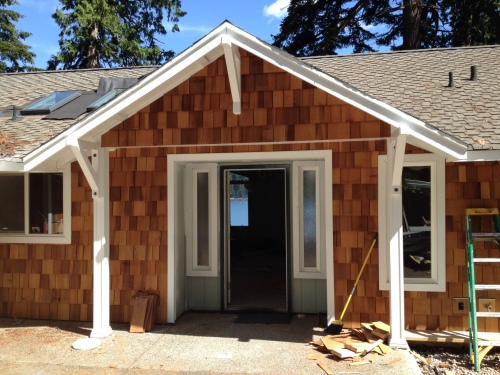 The ugly little house in the woods by the bay is nearly all shingled now in red cedar. Its trim has been painted a clean bright white, reflecting light under the eves rather than the sickly green of the former siding. The roof always was in good shape.

“A good roof? Well, that’s a start,” chuckled my father when we told him of the house we had purchased on San Juan Island.

Now our house looks at home in the old growth forest where it stands. Its scent is as sweet as the trees. We started on the outside with this house, and are working our way in with a remodel. Closeness to nature has always described this move. Forgetting how late it stays light here, it’s easy to keep clearing brush well into the night. And working by the water’s edge hardly feels like work at all.

When the interior is complete, we have every intention of being back out and into the cathedral hush of the trees, mucking about on the water’s edge, or out to sea.

Living on a boat, we eat out more than we ordinarily would. One evening, climbing the darkened staircase at McMillin’s in Roche Harbor and being a little night-blinded myself, I reached for the handrail and marveled at the feel of it. Now how often do you come back to the dining table raving about the handrail? But a Douglas fir branch, debarked and organic in shape, seemed like something I had to have and to hold forever. So that will be coming into our home too, as handrails, wherever we have the opportunity to use them.

“This is the time of year to peel logs, when the sap is running,” Brian Prescott at the Egg Lake Sawmill & Shake informed us. “Otherwise, in winter, the sap goes into the roots.”

Along with eating out too often, we are also ferrying to and fro the mainland more than we would like. Sometimes in our wagon, often a rented UHaul, but always carrying material or household possessions to store in the garage. On one occasion, having picked up slate tiles for a floor and Carrera marble tiles for a wall, we fell in behind a large flatbed truck carrying logs—a common enough sight in the Pacific Northwest. But something about this particular load caught both our eyes, that plus we had over an hour’s ferry ride to stare at it.

I noticed the flower-like shape in the cut of the trunks, not like any log I’d ever seen. And my husband, for his part, must have noticed everything. For later, while out at Egg Lake Sawmill & Shake, he spotted the very same truck. It hadn’t been offloaded yet, and sure enough, it had just come across on the ferry.

If you’ve never seen a man fall in love with logs, you are missing something. The logs, we learned, were Yew, trucked up from Oregon, and Paul just had to have one. Our Yew is nearly ten feet long, milled, planed, ready to be trimmed a bit and mounted as a fireplace mantle on a yet-to-be-built rock wall that was inspired by the long log.

One of the things I love most in design is similar to what I love most in writing: the way you don’t know where the inspiration will come from, or where it may go. This happens every week in my writing workshop. Flushed faces all around the table, having written our stories, shared and enjoyed them, when everyone started without a clue that there was anything in us at all.

Paul and I didn’t know we had this house in us either.