A Life Seen in Patterns

This is how it happens. Day after day, a boy steps out back to pound nails. After a while he decides he’s pretty good at it. The boy grows up to be a carpenter. A young girl hears again and again, “Go to your room, young lady!” and there she hones certain skills. For me it was making mazes. All I needed was a pad of graph paper, pencils with good erasures, and the sanctuary of my room. There, I was free to lose myself–and find myself–in the mazes of my own making.

In some inexplicable way they meant everything to me.

Like Anna Shechtman who started constructing puzzles at fourteen in “Escaping into the Crossword Puzzle” (The New Yorker 12.20.21), “I retreated into the grid.” Here we found our solace. “A grid has a matter-of-fact magic, as mundane as it is marvelous,” she explains. “From sidewalks to spreadsheets to after-hours skyscrapers projecting geometric light against a night sky, the grid creates both order and expanse.” Anna moved letters onto the page, while for me the squares became paths of entrapment and escape.

In time Anna became assistant to Will Shortz, crossword puzzle editor of The New York Times.  For me, maze making led to the drawing of floor plans and interior design—for aren’t they both about how we move through space? That was the sequence for me, and mazes were my portal.

I have also lived on a fair share of islands:

At some point, it seems, islands and waterways became the grid.

Will Shortz believes people have a natural desire to fill empty spaces. I see the empty spaces as paths. Both order and expanse, entrapment and escape. And how we move through space.

The way land breaks up and becomes inlets and seas and islands, one after the other,

like jigsaw pieces when the box is first emptied and all the pieces turned over.

For what are islands but broken land?

“A story about water, time, and knowing when the time is right,” by Maria Michaelson

“You’re going to get a truck,” people said when we moved onto the island. Not us, we thought, as I stood solidly by my Volvo wagon of nearly twenty years, and Paul, his Porsche. Two years later a 1989 Toyota pickup rolled into our drive, and this old truck has been my husband’s second mid-life crisis, if you will.

We also heard legend that “women on San Juan Island grow strong.” I now know this to be true. Again and again, I meet remarkable women, often rolling into their eighties or nineties, sharp as a shark’s tooth, with no sign of slowing down. This island is teeming with strong women.

I’m not suggesting it’s a matriarchy, but perhaps the most egalitarian place I’ve ever known.

So I asked some local women for their stories, and I didn’t have to go far. Chairing the Master Gardener Demonstration Garden, an 82 year old woman has been in charge for more years than she can remember. As volunteers, we strive to keep up with her. Supplying fresh produce to The Food Bank, The Demo Garden is open year-round and throughout the pandemic. Recent wind advisories topped 50mph, and there was our chairwoman, bundled in more layers than Nanook of the North, harvesting kale.

Historically several large farms on island were run by single women. In researching old barns for an art installation, one woman–who went on to become president of the San Juan Islands Museum of Art–informed me that “Lizzie Lawson (1879-1968) took the seat out of her car, a Liberty, loaded it with sheep and took off for the fairground.” Back in the day, farms on island primarily raised cattle and sheep as well as growing orchards and vegetable gardens. Little has changed. Life is pastoral here and farm or no farm, growing food, a religious experience.

“In the garden one is moving with rather than against the inhalations and the exhalations of greater wild nature,” notes Jungian analyst Clarissa Pinkola Estes in Women Who Run With the Wolves. “Whatever happens in the garden can happen to soul and psyche—too much water, too little water, bugs, heat, storm, flood, invasion, miracles, dying back, coming back, boon, healing.” On islands we live by the seasons and the seasons live in us. We share this of course with all the islands in The Salish Sea. Perhaps with most islands everywhere.

When contractors were remodeling our home—young men who had grown up on island—I always heard in their conversations an awareness of what was running: the halibut, the salmon, the season for prawn, crab, and I-hate-to-say-it, the deer. I thought, I want to become like that. Knowing the seasons by what’s in season, as in the garden.

“Living here I carry a battery-powered chainsaw in my vehicle in case I have to remove a tree branch from the road,” a friend tells me. She splits and stacks wood for heat in her home in the winter, and with her husband owns a tractor for clearing the road after snowstorms on Mt. Dallas, where they live. Although my friend lived most of her life in a city, she has found her place here. “The wildness and the beauty. The people. The independent shops and businesses. The theatre and museums. The post office and the grocery store. The ferry. And so much more.”

Farming, fishing, kayaking, boating, piloting, filmmaking, acting, establishing a documentary film festival, a community art center, and taming wild mustangs. And behind closed doors, consulting, researching, writing, and making art. Women conducting tireless public service or running businesses, all of it making an illustrious impact on a sparsely populated island. That auto shop you frequented for years on island? The woman who owned it at one time soloed on a sailboat in hurricane force winds in the Pacific for 41 days. Both a book and a film were made of her ordeal at sea.

Many women brought a wealth of political experience and activism to the island. “I have always felt it is important to give back to whatever community I have lived in,” notes one. “From that, I have made friendships that will endure long after I leave boards and indulge in the pleasures of book, garden and sloth.”

My neighbor moved onto the island from what we like to call “the other Washington.” Professor Emerita of International Migration at Georgetown University, she educates us all on global migration and refugee issues at every turn. Do women on San Juan Island grow strong, or has the island attracted strong women to its shores? Perhaps that’s it. The old pioneer spirit in women, still pushing west and toward Alaska.

Tagged as San Juan Island WA, Women Who Run With the Wolves

The Geography of Home 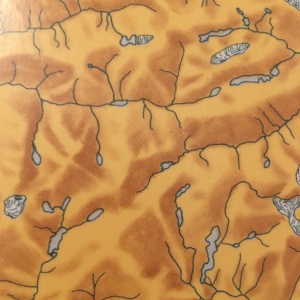 In the city, nature has to be contained in a pot, a plot, upon a rooftop, a park, or in a conservatory. I started this month at The Brooklyn Botanic Garden. I had been in the city for some time, and in stepping into the garden everything was turned inside out, or right side up, again, for me. Suddenly woods where there’d been blocks of brownstones. Fields in lieu of pavement.

Oh right, I thought, I’m a country girl now living on bucolic San Juan Island, Washington with the birds and the foxes and the deer, where the trees meet the sea, and the air is so fresh it’s delicious—for I’d become acclimated to the city and was finding beauty there: in displays in store windows, in handsome pairs of planters at doorsteps, in art hanging high through the living room windows of illuminated brownstones, and all the gathering places: corner cafes and restaurants.

Not long afterward my Brooklyn daughter attended a conference in Laguna Beach, California. Gazing at the Pacific out the window of her train running up the coast from San Diego, she asked of the universe, “Remind me why I live on the East Coast….”

I can only tell my daughter that I go through this question all the time, coast to coast. This wanting to split myself in two—at least two—and live another life as well, somewhere else. The feeling that I belong there too, and that a ghost of me may indeed be living that life and I need only catch up with her. Hop into her shoes. Hop into her flat in Brooklyn. Hop into her little casita in California. All the places where ghosts of me dwell, walking with no footprints and sighing without sound.