In my last post it was one step forward, two steps back with the deer ones eating nearly all my plantings, and in the process of watering those plants, thistle grew. An insidious, obnoxious weed.

And every now and then, a leap. My theory is that if we weren’t plugging away step by step, we would never reach the ledge where we can jump like that. Leaps are what we live for, after all.

I had been blogging on remodeling for a year before I realized I hadn’t included any “before” and “after” photos, which must be the bread and butter of remodeling blogs. So here it goes: 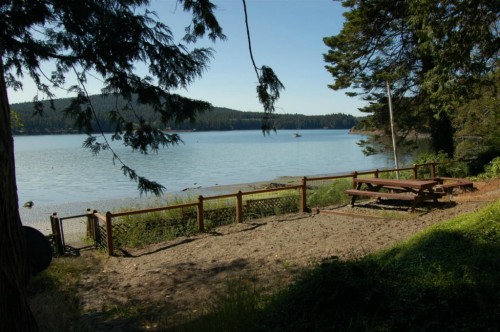 our scrappy lot when we moved in 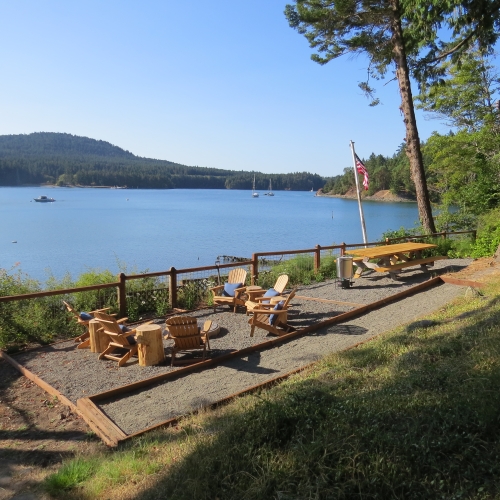 the Pacific Northwest pleasure grounds it is now.

This is where we weeded, framed the areas, and put down a weed barrier underlayment. Where we carried gravel in 5 gallon buckets, one in each hand for balance, from the driveway where the truck had dumped the load, down a long flight of stairs to empty on the underlayment. Three days of doing this, four yards of gravel. My husband’s FitBit read 12 miles each day. We have a friend on island who sent her gravel downhill by constructing a chute out of tarp. In our case it was a staircase, and so we had to carry.

This is where we dine on an oversized Western red cedar table made by our friend Bill Maas at Egglake Sawmill & Shake. Where we will sit around bonfires at night whenever the drought ends, and otherwise just sit around. Where we wrap ourselves in Pendleton wool throws at night and place our beer or wine or Moscow mule glasses on cedar stump tables beside each chair.

The cedar stumps too came from Egglake Sawmill & Shake, rough with bark. First the edges were routed to create a smooth bevel at the rim and base, then the bark was peeled, and the stumps were sanded–first with a belt-sander, then fine sanding. Finally, multiple coats of a clear polyurethane coating, and when dry, they were good to go. 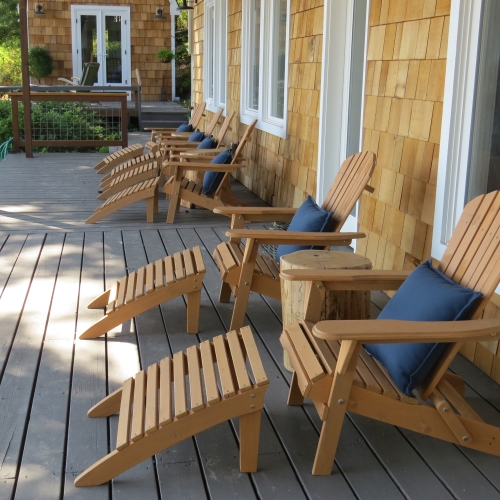 There were eight stumps in total. Four around the fire, three on a deck between Adirondack chairs there too, and one was so grand in size and particularly good looking, I placed it in the living room. My thinking now is that every French bergère chair should have a rustic cedar stump beside it.

So what if it slants a little?

Outside again, this is where we have every intention to play bocce ball—once we get the right material in the court and compact it with a lawn roller and do everything right. For a premium surface—where the balls roll fast, track straight, and absorb bounce–building a bocce ball court is much like constructing, and maintaining, a Japanese Zen garden. In the end it is covered with crushed oyster shells and dusted with “oyster flour” made from pulverized oyster shells, for proper texture and drainage.*

What a difference a year makes. In Seattle it was all about fine dining, theatre, and literary readings. In the islands, crab boils upon picnic tables, gravel, and oyster flour.

*Note: Ours will be less than perfect. Paul calls it a drunken bocce ball court because it is not completely level.