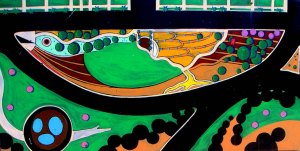 I remember my uncle’s visit in Southern California. We were living in Laguna Beach at the time, and, recently widowed, he was traveling to New Zealand from New England. We were a half-way resting place and ever so happy to have him.

My uncle looked upon it all incredulously. From Connecticut to California it must have been like landing on the moon. Main Beach is to Laguna Beach what “The Town Green” is to New England. In Laguna, a well-tended lifeguard tower stood in lieu of a white gazebo. And sand and surf where there was usually a lawn. Main Beach bustled with people, tan, fit, and half-clad.

I was seeing all this through my uncle’s eyes.

“Everyone’s in motion, aren’t they?” I asked. He could only nod.

Today our daughter lives across from Bird Park in San Diego. Bird Park is a part of Balboa Park, the famed legacy of Kate Sessions. Balboa Park may be to San Diego what Central Park is to New York City.

There is something so timeless about this scene from our daughter’s front door: a child and a swing, families picnicking. Strollers, bikes, rollerblades, scooters. Stretching routines and soccer practice.

Constructed in the shape of an enormous bird, Pershing Drive is the “branch” on which the “bird” stands. Employing native plantings to attract local birds, Bird Park is the brainchild of San Diego artists Robin Brailsford and Wick Alexander.

I raised my children not far from here in this climate when they were very young. Out every day, all day, is how I remember our time together. We were card-carrying members, regulars at The Wild Animal Park, now Safari Park. Strolling The Kilimanjaro Trail, lunching at picnic tables, napping in a double stroller while still moving.

A short jog off The Kilimanjaro Trial, we liked to cut through an Australian Rain Forest exhibit for the girls were fond of wallaby’s and kookaburras—as amused by the names as much as the animals. For me it was the vegetation, a green respite from the dry brown heat of the African-based trail. In the shelter of the rain forest I pointed out bronze signs in braille to two little girls who were learning to read English at the time. Their fingers running over and over the raised dots in each sign.

Sometimes you are all of one place. The climate became us. The park, wildlife, and horticulture, became us. I could see my daughters in khaki uniforms one day working summer jobs there. But then we moved. How did we ever move to the desert when San Diego was desert enough? I ask myself this now.

I live on an island now, and I have become it. I hear from friends that the bulbs are pushing up, and I must return.

Life moves in mysterious ways. Sometimes in circles, sometimes in avian shapes. But never in a straight line.

Filed under The Town Green