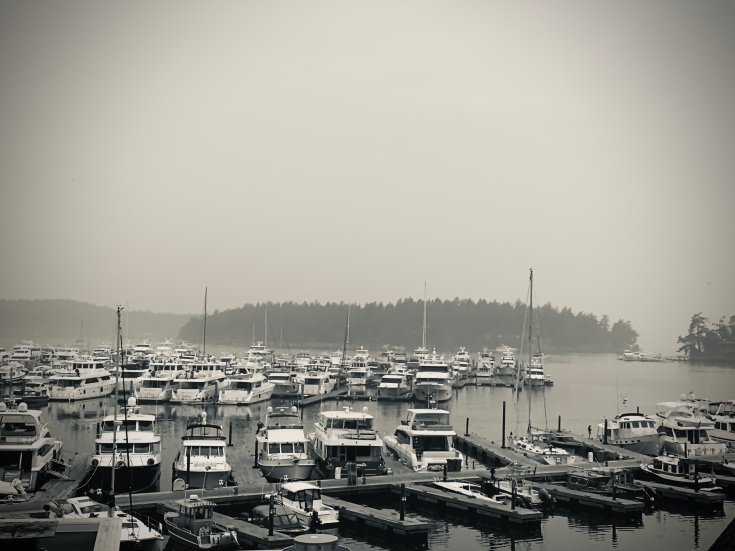 We saw the photographs and footage like everyone else. Forests in red blazes, orange skies over San Francisco’s Golden Gate Bridge, a mustard gas like atmosphere on the ground in Los Angeles. Runaway wildfires working their way up the coast, California, Oregon, Idaho, and Washington.

In the San Juan Islands, just off beautiful B.C. Canada, we were sailing along under blue skies for a time, feeling grateful. That was last week.

This week the smoke is in our hair, on our clothes, in our eyes, in every breath we take. All we can taste is smoke and it tastes like cotton/wool/flannel. No, it tastes like fleece. Smoke strips everything of color, rendering it flattened and forlorn. Smoke silences our forests.

We should have known it was coming. One evening last week we felt a course wind, “like a Santa Anna,” my husband noted. One by one the birds left the island, taking their songs with them. The only birds I see now are Resident Canadian Geese and Northwestern or American Crows. Resident Canadian Geese are born here, don’t migrate, and have lost all instinct to fly off. And crows, like cockroaches or coyotes, are scavengers, poking through paper plates and napkins left on outdoor restaurant dining tables.

Basically, birds live on the edge. Because of their highly sensitive respiratory system, caged canaries were at one time carried down into coal mines to detect any dangerous gases, such as carbon monoxide. If the canary died, miners would flee the mine. But we can’t climb out of this. Planet Earth is our home, and air quality has no borders. It’s like the ocean.

We’re all living on the edge.

A few years ago a woman I know from Houston, Texas visited Seattle. She couldn’t wait to leave, it was too green for her. “When you’ve seen one pine tree, you’ve seen them all,” was her refrain. Never mind that our forests in The Pacific Northwest are comprised of Douglas Fir, Western Hemlock, Western Red Cedar, and Sitka Spruce as well as Ponderosa Pine. They were all the same to her. And they all do their job in being one of the great “lungs” on earth—keeping places like Houston alive.

We cannot afford to lose our forests if we’re going to keep our planet pumping. Climate denialism will never replace lost lives, homes, towns, forests, wild animals, beloved pets, and birds overcome by heat and smoke. What’s in the smoke? My friend, Jeff Smith, retired RN in San Francisco tells us, “Smoke is not just particles—it is all the substances that are burning. It is gases and plastics and pesticides and toxic metals and flame retardants. These get attached to the particles and we breath them in. And we absorb them through our skin… and we ingest them.”

No one survives smoke plumes upwards of 10 miles high containing thunderstorms, lightening, and tornados. Unprecedented drought, soaring heat and strong winds fueled these flames. Meanwhile snowpacks have been shrinking in the mountains just as oceans have warmed.

As Governor of California Gavin Newson put it, “The debate is over on climate change. Just come to the state of California.” Oregon, Idaho, Washington, and British Columbia, Canada, I might add.